The Wealth of Nations – Do We Need a New Measure?

GDP, or the Gross Domestic Product of a Nation has for years been used as the barometer of its wealth, success and power. Countries with high GDP participate actively in global decision making & the ones at the very top, usually have the final say. India, with the GDP of nearly $3 Trillion ranks 5th in the world. United States of America (~ $21 T), China (~ $14 T), Japan (~ $5 T) and Germany (~ $4 T) are ahead of us, for now.

This blog is an inquiry into the validity of GDP as a measure of a country’s wealth. What alternatives do we have and why do they, in my viewpoint, hold more water than the simple GDP. The inquiry is far more relevant for a country like India. At the end of this read, you might be encouraged to look at our global ranking differently; the ultimate goal of course, is that we can all strive for some form of equality.

Before I get into the subject, it would be good to understand what GDP is. Put simply, it is the sum total of all final products and services produced by a country. The higher the value of the final produce, the higher the GDP. When inflation is factored in, we get Nominal GDP. Remove the effects of inflation, and we get Real GDP. As you can gather from this meaning, GDP has little to do with the prosperity of a country’s citizens or with their standard of living. By itself, it is a dumb metric of how much that country has produced. It leaves a lot to be desired.

What does GDP mean to you and me?

A metric that I find more favourable as a measure of a country’s wealth is GDP per Capita. This is simply the GDP of a country divided by its population. It is a measure of the wealth that can be attributed to an individual citizen. Therefore, while a country’s GDP may numerically be low, its per capita could be much higher if it has a lower population. Take Finland for example. It ranks 44th on the GDP list and has a GDP 1/10th  of India. But its population is 0.4% of India’s and its GDP per capita is amongst the highest in the world, nearly $ 50,000!

India’s ranking when measured on per capita terms is abysmal. We rank 156 amongst 228 countries, alongside Cabo Verde (an island country in the Atlantic Ocean, and one that I didn’t know existed before writing this piece!), Laos and Uzbekistan. And yes – for the highly wound ‘nationalist’ – we are 15 places above our poorer neighbour, Pakistan.

What is equally telling is how we compare, on per capita terms, to the 5 nations I mentioned above – charts are in in $’000s 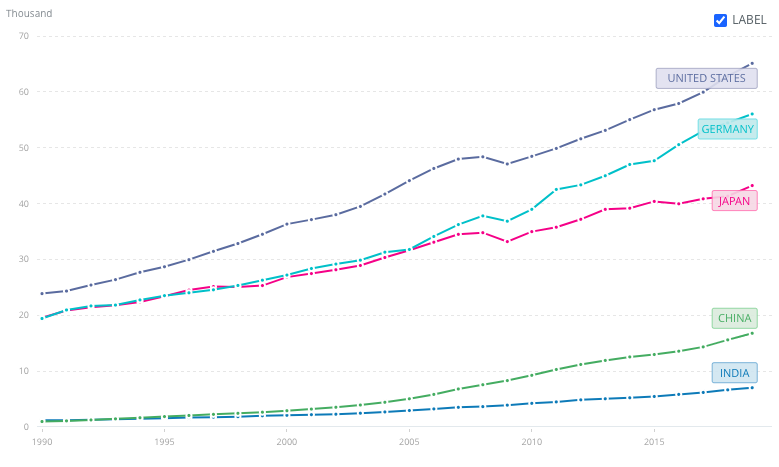 When compared to countries that lie outside the ‘top 10’ list, here is how India performs – again, not a pretty picture 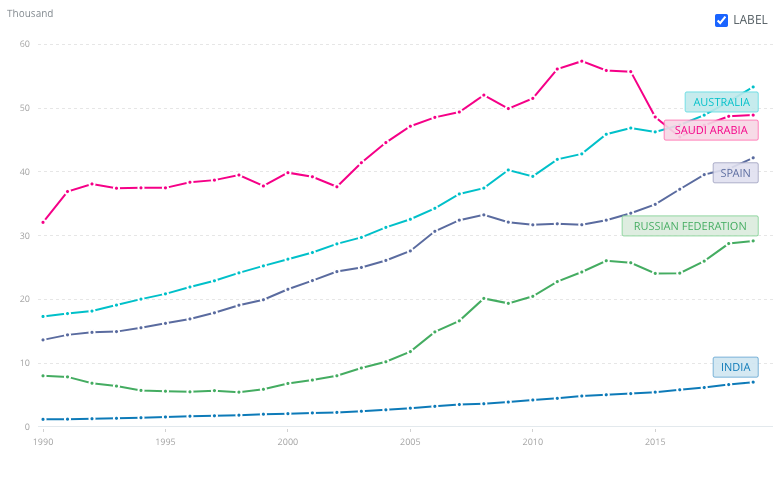 The keen eyed will notice that the annual growth rate of per capita GDP has been as poor as our ranking on these terms globally. You can notice a clear jump in China’s graph in 2005 – the shape of its graph is much steeper, which means its growth has been phenomenal. India’s growth, in comparison, has been tepid.

HDI, or Human Development Index is a measure of a country’s achievement on social and economic fronts. The UN Development Program’s website puts it thus – “The HDI was created to emphasize that people and their capabilities should be the ultimate criteria for assessing the development of a country, not economic growth alone”. The HDI is the geometric mean of normalized indices for (a) health, measured using life expectancy at birth, (b) education, measured using the mean years of schooling, and (c) standard of living, measured using national income per capita.

There is no doubt that as a nation we are making progress in the ares of health and education, but we undoubtedly have a long way to go before we can call ourselves truly prosperous.

We need a new barometer!

One would argue that India ranks this low on per capita and HDI because of its massive population. Few outliers would also harp on the need to introduce the Uniform Civil Code to rein this in. I beg to differ. My humble submission is that we have underutilised our population, have kept them bound with the chains of petty disputes and have built a system that does not encourage them to leap forward. At different points in the last 3 decades, we have either failed to motivate our people to dream big, or when we have placed big dreams before them, we have failed to provide them the tools to achieve those dreams.

Next, and what is more important, is that the inequality in wealth (real wealth that one owns, not the per capita arrived through simple division) is stark. It is stark in many developed nations too, but in India, the chasm is so wide that one cannot imagine when it would be bridged. The 2018 ‘State of Working India’ Report by The Azim Premji University presents a sombre picture. Of the small portion of India’s vast population that works in the formal sector, nearly 60% earned less than Rs. 10,000 per month! Only 0.2% households earn more than Rs. 100,000 per month! With the pandemic still around, these numbers would not have changed for the better in 2020. On the other end of the spectrum, I was recently reminded that the wealth of Mr. Mukesh Ambani, India’s richest man, is nearly Rs. 6,00,000 Crore! Picture that.

As a nation we have placed disproportionate emphasis on the GDP number and have for much of our recent past, ignored what that translates to our citizens. Unless we look at more meaningful numbers, we would be turning a blind eye to the challenge our population faces. We would not be creating a glorious future for the vast majority of our people, but, be leaving them, amidst their miseries, to fend for themselves.

We need new measures of prosperity. Now, more than ever.