The coronavirus vaccine is here and vaccination drives have already started in many parts of the world. This may well go down as one of the quickest vaccines ever developed, and based on early results, appears to be one of the most successful ones too. The cure to the pandemic has been found, meaning that normality may well be just around the corner. There is no harm in being optimistic right!

However, the numbers so far show us that the distribution of the vaccine is very unequal. As of the 15th of February 2021, 177 million doses have been administered around the world. Of these, 68.6 million doses have been administered to the citizens of the US and the UK alone, making up 38.75% of all doses. The world average vaccinations per 100 people are around 2.2, but for wealthier countries like Germany and France, it is at least 5. The US and the UK both average well above 15.

In India, nearly 8 million doses have been given out bringing our average per 100 people to a mere 0.64. While that number might appear to be unimpressive, India is intentionally starting out its vaccination drive slowly. We are currently averaging around 500,000 doses per day, with that number expected to rise to 7 million a day at the peak of the drive. The unequal distribution mentioned earlier will not be as much of a problem for us because we have our own vaccines that we are even giving out to other countries. There are many countries in the world, however, who will struggle to get doses and will have to rely on the benevolence of their richer counterparts. So far only 4 African countries have received any vaccines at all, with much of Central Asia and Central America still not having started the vaccination process either.

The problem with countries like the US and the UK essentially hoarding an already limited supply of doses is that it will slow down the global economic recovery drastically. A report by the Eurasia Group published recently found that global equitable access to the vaccine will generate economic benefits to the tune of $153 billion during 2020-21 for 10 major economies (Canada, France, Germany, Japan, Qatar, South Korea, Sweden, United Arab Emirates, United Kingdom and the United States). By 2025, the figure may rise to $466 billion. The issue is that global access to the vaccine is actually very much in the hands of these major economies. Countries like India can do their part but we already have a population of 1.3 billion to cater to first.

Back in April 2020, the WHO and the European Commission, along with the Bill and Melinda Gates Foundation set up what is called The Access to COVID-19 Tools Accelerator (ACT Accelerator). Their main focus is on the development and supply of COVID-19 tests, treatments, and vaccines and it is supposed to be funded by the major economies. So far, these economies have only contributed around $2.4 billion together, while the needed amount is more than ten times that.

A recent academic paper published by European think tank the Center for Economic Policy Research (CEPR) estimated the value of a vaccine that would end the Coronavirus pandemic. It used data from the stock markets to come to the conclusion that a vaccine can be valued at anywhere between 5%-15% if the capital stock in the markets. The research relates to the stock markets of the US. The researchers basically construct a ‘vaccine progress indicator’ which is based on the chronology of stage-by-stage progress of individual vaccines and related news. They correlate this indicator with the stock market returns by running a regression and controlling for other macroeconomic news that would have an effect on the markets and come to this conclusion. 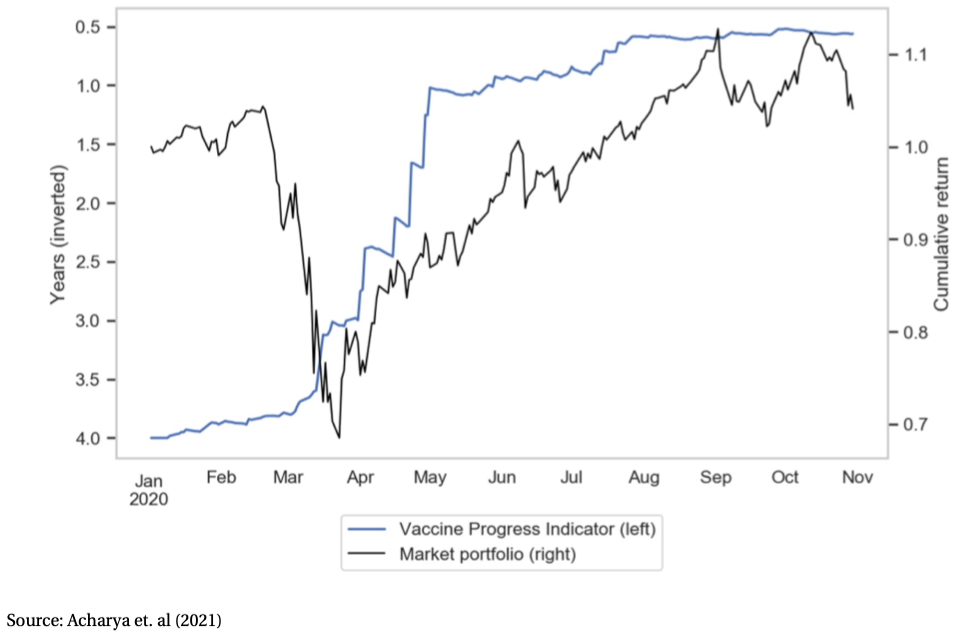 The researchers believe that the reason as to why their model attaches such a large value to a vaccine is because an event like a pandemic can cause a permanent loss to capital stock, which in this case would be human labour. The loss can be permanent through the number of deaths that occur, but there can also be an uncertain loss at the beginning. When the pandemic begins, businesses close down meaning that workers are either laid off or sent home temporarily in order to mitigate against the potential health risks. Since the pandemic has such a negative effect on the environment, some businesses get closed down forever which means that some workers have an uncertain future regarding their return to the workforce.

People would also be unwilling to return to work until they feel secure enough to do so, and this is where the news of vaccine development plays a big part. Of course, there are other factors like safety measures that people can take to minimise the risk, or the actual number of cases in a region, but the vaccine gives people a certain kind of confidence that other factors can not.

Now that the vaccine is here, there must be a global effort to ensure that the distribution of it is fair. The majority of the world’s population lives in the low and lower middle income countries. These are also places that have underdeveloped infrastructure and struggle with resources, while the wealthier countries are much better off in this respect. The Peterson Institute for International Economics summed it up in the title of its recent report, “The pandemic is not under control anywhere unless it is controlled everywhere.”