India is currently the world’s second-largest producer of sugar, behind Brazil. This fact is truly remarkable as there was a time in our history where we relied heavily on imports to meet our domestic sugar consumption needs. The growth we see today is a direct consequence of years of economic planning set out by the Central Government after independence 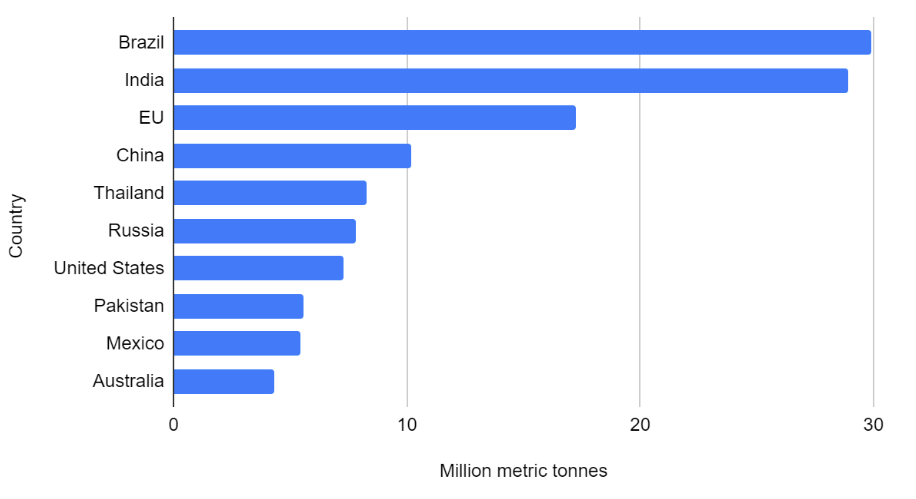 Industrial sugar production has a 100 year old history in India. India had always produced sugar before,  except it was in the form of gur and khandsari. It was only in the 1920s that the vacuum pan mills were first established in North India when modern sugar production began. Initially, India was only producing 100,000 metric tonnes of sugar annually which was not enough to meet domestic demand. The country depended on Japanese import which was proving to be costly.

To encourage domestic production, the government imposed tariffs on imports which saw the number of mills opening up in the country increase rapidly. Initially, only rich landowners in the North were engaged in sugar production which unfortunately involved exploitation of small sugarcane farmers in the process.

Soon, the government passed another piece of legislation known as the ‘Sugar Industry Protection Act 1932’ which would impact the sugar industry in the country permanently. They reduced the size of holdings that each sugar company could operate on, and they began to offer minimum prices to farmers for their sugarcane in states like U.P, Bihar, and Orissa by 1934.

They also created the Cane Growers Programme which saw growers cooperative owned sugar mills being established. Farmers would run the mills themselves by electing a leader to the cooperative. This happened first in Maharashtra which today, is the highest sugar-producing region in the country.

After independence, India was in a tough spot. Famines were frequent and poverty was rampant. The government needed to figure out a way to ensure that its citizens would meet their daily calorie requirements, and as such, among other intakes, it turned to sugar. With each 5 year plan, sugar production in the country improved; careful planning and control were key. In fact, all aspects of the sugar industry were under the direct control of the Central and State Governments (production, distribution, pricing, exports, imports, etc.).

Today, Maharashtra and Uttar Pradesh produce the most sugar India, accounting for 66% of the total sugar produced in the country. Karnataka, Tamil Nadu, Gujarat, and Andhra Pradesh follow them on the list, while the rest of country accounts for a small percentage. 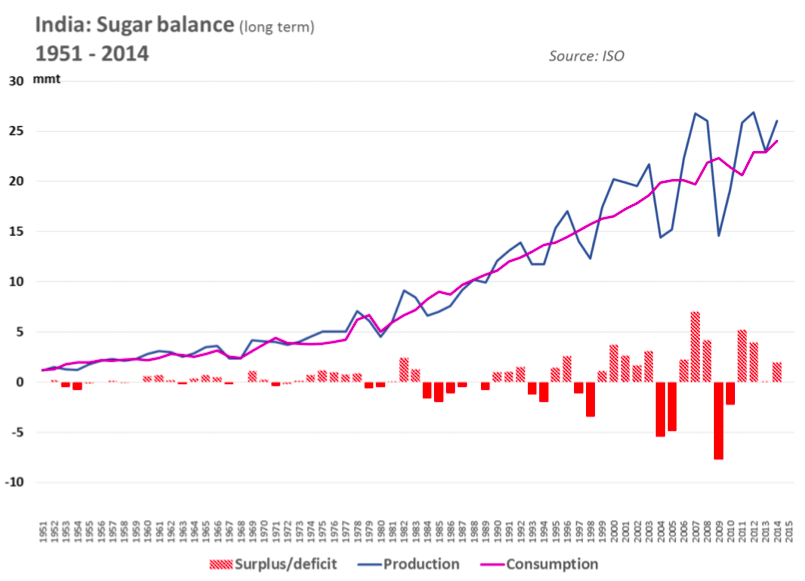 The graph above shows how sugar consumption and production has progressed since the first 5 year plan. We can see that from 1980 onwards, consumption and production increased at a faster rate. This is likely due to the fact that farmers were guaranteed prices for their sugarcane that was not related to the free market price for sugar or actual cane price paid. This may have encouraged higher sugarcane production.

The government’s perceived importance of sugar has led it to be a very profitable crop for the farmers who cultivate it. The average sugarcane farmers are richer than farmers of other foods because of the high minimum prices they receive for it. In fact, the price paid to sugarcane farmers in India as of 2014/15 was around $42/tonne, compared to the US where their farmers only received $31/tonne. Simultaneously, the government has also ensured that the consumer can purchase sugar at very low prices. What this means is that the mill owners are the ones who lose out. They have to both pay a high price to the farmer and sell at a low price to the buyer.

While the government’s policies from the 1950s onwards made sense in the context of that time, the country has naturally changed a lot since then. The dietary problems that India faces today have little to do with calorie intake and more to do with nutritional deficiency. Many Indians struggle to consume their required amount of micro nutrients and proteins which affects their cognitive development and also leads to death in many cases.

Another issue is that sugar production in India is a very inefficient process. The yield per hectare here is only around 65 tonnes whereas in places like Hawaii it can be as high as 121 tonnes, nearly double. Land degradation due to excess use of water and high dosages of fertilizers have been identified as the main reasons for low yields in Maharashtra. In the North, sugarcane is grown throughout the year with no crop rotation, which also adversely affects the yield. Farming sugarcane also places heavy stress on natural resources like water and can lead to food and energy insecurity.

Per capita consumption of sugar in India is lower than that of the world’s average. The average Indian consumes around 19 kg of sugar annually while the global average is at 23 kg per person. This is due to the health effects of consuming too much sugar, the knowledge of which has been spreading rapidly due to the impact of social media.

Even with all these issues being apparent, India continues to produce more sugar than it needs. This leads to a number of issues. During some years we dump the excess sugar on the international market forcing prices down the world over, which is not received well by other sugar exporting countries like Brazil.

Another problem is that the excess unsold sugar remains in warehouses owned by the sugar mills. Payments to the sugarcane farmers are delayed as a result.

One of the reasons why we produce so much sugar also has to do with the fact that politicians in the country profit from the sugar mills. In a study conducted in 2012 by researchers at Dartmouth College, it was found that during election years in the cooperatives, the minimum price paid to farmers was substantially lower than during non-election years.

The explanation is that candidates would siphon money out of the cooperatives to run their campaigns. However, in the following year the newly elected head of the cooperative would pay a much higher minimum price to farmers, to make up for the losses from the previous year. This means that the farmers are supportive of whats going on.

"...perhaps, from the farmer’s perspective, price drops are not theft by politicians, but indirect campaign contributions for which they receive compensation later." 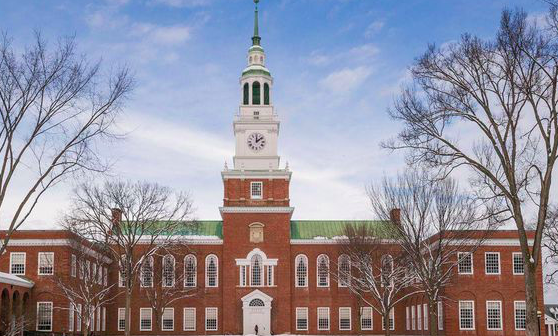 In order to solve some of the problems described above, there are a few steps that the government can take. In 2012 the Rangarajan Committee made recommendations towards improving competition within the industry and empowering the farmers to do business outside of their designated region. It also recommended that the government ease its controls on exports as while India is the 2nd highest sugar producing country in the world, it only accounts for 4% of the worlds sugar exports.

The newly passed Farm Bills in 2020 will make it possible for the sugarcane farmers to sell their produce outside of their jurisdiction, which will serve to improve competition like the committee has suggested.

The country also needs to adopt a biofuel policy that encourages the production of ethanol made from sugarcane juice. The government has set a target to increase its ethanol to gasoline blending rate to 20% from its current rate of 6% by 2030. This appears to be in line with the governments vision to switch to using 30% electric vehicles in the country within that same timeframe.

Using sugarcane juice would also free up land to cultivate other foods that provide the micro nutrients that Indians need.

Being a high sugar producing country is not a bad thing at all, especially when farmers enjoy high prices for their crops. The country needs to, however, manage the industry in a more efficient manner as the policies that were employed to build up the industry no longer serve their purpose.