Pew Survey on Religion in India – Laughable or lamentable?

Employers routinely conduct surveys asking their employees about the company, its management, its HR policies and stuff like that. In the lead up to the survey, employees are repeatedly assured that their answers will be confidential, will be collated by some external company and the employer himself will have access only to anonymous summary data. The employer can make that declaration a million times, he can print and sign it on stamp paper, swear to it on every possible holy book he can find, but not even one employee believes that the results are confidential! They ‘know’, they ‘just know’ that the part about confidentiality is all bunk and ‘wrong’ answers will come back to bite them! And nobody can ever convince them otherwise! Which is why you rarely find explosive or sensational revelations in the answers – either you find all-out sycophantic praise for the company or at the most, very mild and painfully ‘constructive’ criticism!

Pew Research Center conducted a survey of India with respect to its main social and political pillar, Religion, with a bonus sprinkling of the other three pillars thrown in – Caste, Politics and Language – and published their survey results recently. Personally, I don’t put too much faith in these surveys. Surveys about the four pillars of India are somewhat like the above employer surveys. Rarely do people answer such survey questions truthfully, especially in current day India and especially about these topics.

I remember the polling that was done in the US before the 2016 Presidential elections. Almost all of them pointed to a crushing victory for Hillary Clinton, but the actual poll results crushed her instead. Pundits may have all kinds of fancy terminologies for this pre-poll phenomenon, but the fact is that most people will seldom openly admit to nursing socially shameful or unacceptable attitudes, like their support for Trump or their animosity towards other religions.

I am sure the Indians involved in the analysis of the Pew results would have told Pew that such results should not be analyzed from the point of view of soda bottle spectacled statisticians, but against the setting of a very high context societal culture where opinions are often a composite mixture of Yes, No and Maybe, much like the eight-directional nodding of Indian heads. Also, Americans are a bit naïve and tend to take answers at face value like they did in 2016. So, while reviewing these survey conclusions, please make sure you have a large helping of salt at hand. The survey took into account 6 major religious sects in India – Hindus, Muslims, Christians, Sikhs, Jains and Buddhists. Personally, I found some of the answers incredible enough to be laughable at times and lamentable at others. I would like to discuss just a few of the ten points mentioned in this report.

For example (as detailed in #1 of the report, see chart above), across all six religions, 73 to 91% of respondents variously felt that respecting all religions is very important to being truly Indian, that respecting other religions is a very important part of their own religious identity and that they were very free (note to myself – not just free, but ‘very’ free) to practice their own religion.

To all those who are inclined to believe these pious-sounding answers, I would recommend a weekend picnic to Twitter or Facebook or to the Comments section of Times of India articles on the topic of religion for a quick cure for such delusions. In the same breath and point, these Indians felt that their own religion had nothing much in common with other religions and a large majority across religions find it important not to allow interfaith marriages.

How anybody can think that these two sets of feelings are not contradictory is beyond me. The report uses two words to describe this dichotomy – ‘tolerance’ and ‘segregation’.

I think Gandhiji unwittingly did a great disservice to this country by making ‘tolerance’ a part of India’s social lexicon. It is a convenient catch-all peg to hang all your different degrees of inter-communal disrespect on. For me though, what ‘tolerance’ means is not respect, but a general my-door-is-shut-for-you, don’t-come-knocking emotion.

It is no wonder that all over India you have practical evidence of this dichotomy – sellers who will not buy from or sell to people of another community and entire buildings or apartment complexes that will not allow ‘outsider religions’ to own or rent apartments. There may be examples in other walks of life too, but these are the ones I have seen or heard first hand.

This dichotomy is just not restricted to religion, it seems. It also extends to caste in exactly the same way (#7). I am sure it extends to sub-castes and probably lower down too. According to the survey, a majority of respondents don’t want even inter caste marriages within the same religion. It is bad enough that we pious Indians have to ‘tolerate’ being compelled to live in a mixed society, but that doesn’t mean we will ‘tolerate’ having mixed in laws!

We are in the 21st century, the world (and India too) is dreaming of reaching other planets, and yet this country is unable to get rid of something as base and evil as caste from our society. The survey should have dug further into this aspect of Indian society, not only to show us how many walls we have erected between ourselves vertically, but also how many air-tight layers we have injected between ourselves horizontally.

Somehow, there seems to some form of general consensus that this is all good and ‘tolerance’ is actually a great virtue of Indian society. For me, ‘tolerance’ is not a virtue that we should value. It is something we should in fact be ashamed of, that we have lived beside each other for centuries, shared all the joys and sorrows of our times, gone through so many triumphs and debacles together and yet apparently, we still want to live in total seclusion, isolated and insulated from each other. People treat their pet animals as part of their family and would probably hunt me down if I were to say that I can just about ‘tolerate’ pets at home. I would hate to ‘tolerate’ somebody. The word itself is so ‘un-dignifying’. If an acquaintance were to say that he ‘tolerates’ me, I would take immediate umbrage almost as a reflex. And yet we are able to use the same word for millions of our fellow human beings without shame or qualm. 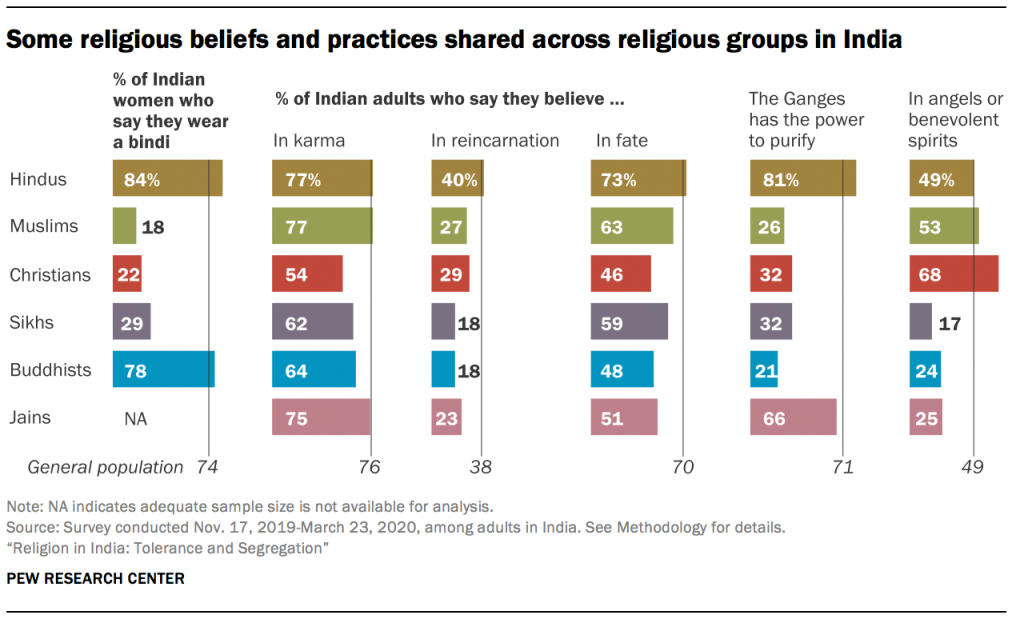 Juxtaposed against this depressing feeling of being merely ‘tolerated’, is a more heartening finding (#10) in the survey that a small minority of Indians often ‘engage in practices or hold beliefs that are more closely associated with Hindu traditions than with their own.’, like wearing a bindi, believing in karma, reincarnation etc. A smaller minority even celebrates each other’s festivals. I remember the mutton biryanis of my Muslim friends and the dhansak of the Parsis that we enjoyed with our friends in school and even later. It never even occurred to us that they were from religions different from our own or that it mattered so much. Here in Bangalore, if you stand outside a church after Sunday service and look at the attire of women, you will find bindis and flowers in the hair, even a few ‘taalis’ or ‘mangalsutras’, and toe rings, all Hindu traditions adopted by Christians quite naturally, without coercion or deliberate decision.

I am not saying this because Hindu customs have been adopted by other religions. What I am saying is that the adoption is but natural, considering that even the largest minority in India is surrounded by a majority that is fourfold and more. In my opinion, this symbolizes something beautiful about human society, the unconscious intermeshing and osmosis of cultures. You automatically adopt some of the practices you constantly see around you for a long time, just as you learn the languages you grow up hearing in addition to your mother tongue. I would be surprised if the same has not happened with the Hindus in Pakistan or Bangladesh. Surrounded by a Muslim majority, I am sure the Hindus there would have unknowingly adopted many Muslim customs, their attire and language.

The problem is created when the majority population in these countries is not satisfied with just the gradual assimilation of cultures, and wants the total and immediate erasure of other cultures and the survival of only its own.

I think it depends on your outlook and how you have been brought up. You can either live on a dry island in the middle of the ocean, refusing to touch the water or allowing it to touch you and refusing to learn swimming. Or, on the other hand, you can wade into the water, allow the waves to wash over you and learn the different strokes and joys of swimming from the people around you. Open minds do the latter. 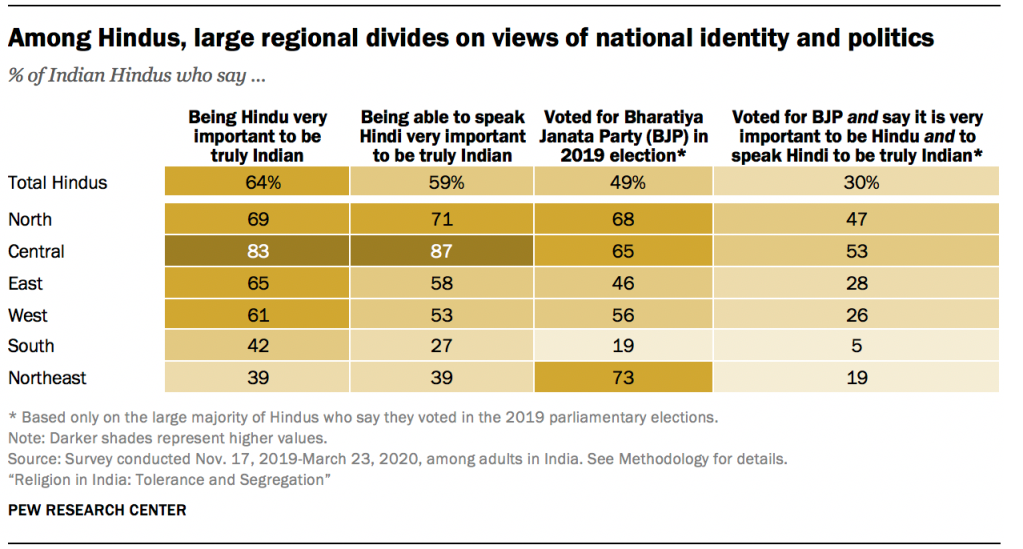 Apparently, according to a large section of the survey responders, a great part of being Indian has to do with the ability to speak Hindi (#2). As per the 2011 census, about 57% of the country spoke Hindi as a first, second or third language. But basically, this survey response questions the “Indianness” of about 43% of India’s population living in about 57% of the country’s territory!

Sarcasm aside, the tragedy of India is that we seem to continuously seek ways to divide ourselves and then look to other artificial factors to unite us. Oh, only if we all spoke Hindi, and if we all followed the same religion, we would be more united, we would feel more Indian. And then, if these two factors were to become true, and provided we all make ourselves belong to the same caste, then we would all support the same political party (#3) and then we would all live happily ever after.

The beauty of India lies in its diversity. Every 200-300 kilometers across the length and breadth of India, everything changes, the language, the attire, the climate, the food, the traditions, heck, even the skin color of the people. Why on earth would we want to sacrifice and exchange this for boring uniformity instead of reveling in the chaotic, colorful splendor of its uniqueness?

Like I said, one needs to be careful about swallowing the results of such surveys too readily. I am just hoping that some of these responses have been given ‘carefully’ and not instinctively.

It would indeed be utterly disappointing if it was all true.

Sundar writes regularly on his blog https://mynuscript.com. You can contact him at sundarviswam@yahoo.com Most importantly it will create awareness on a subject most Political Parties are afraid to speak, though they feel it is necessary.