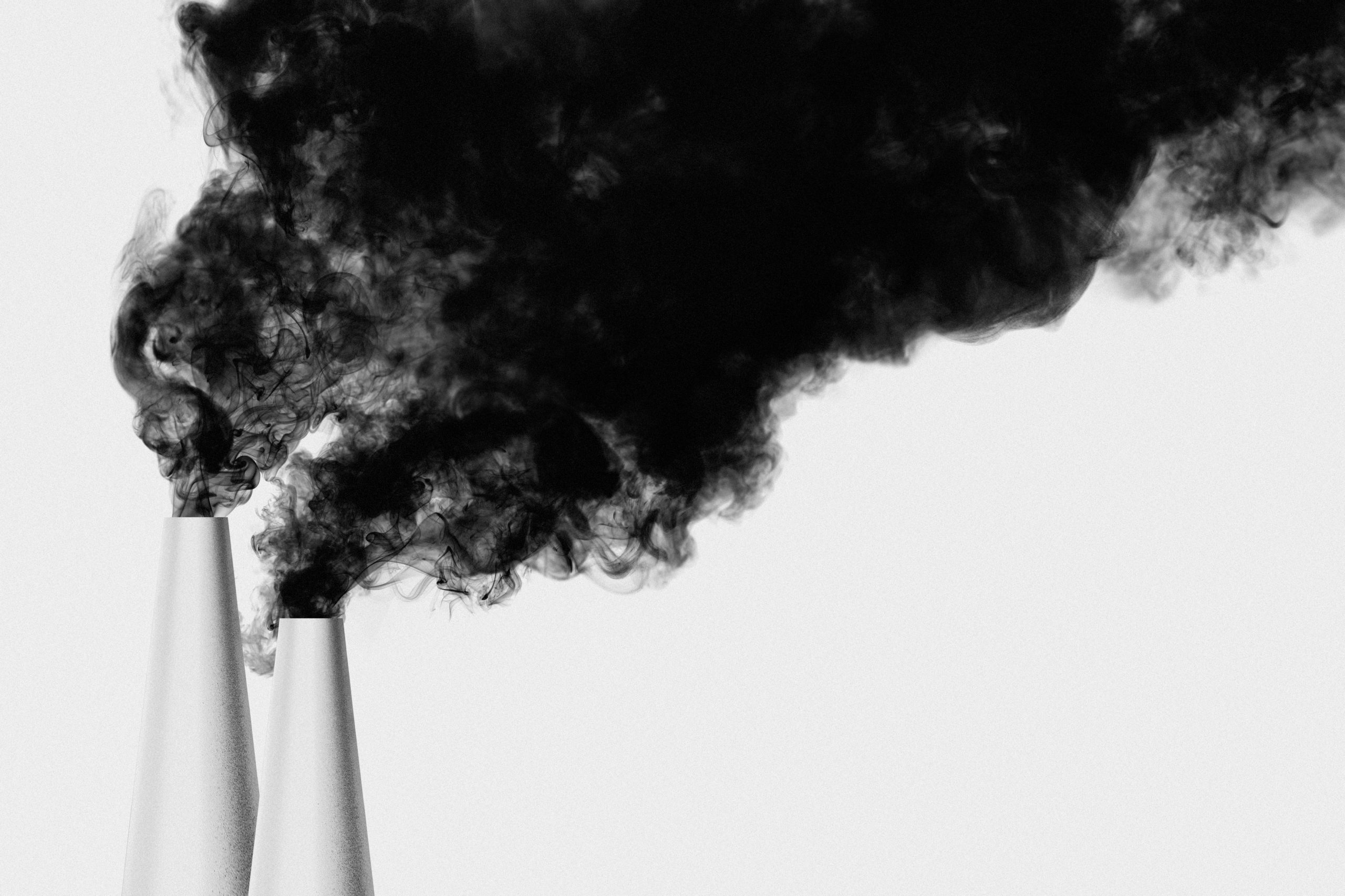 The Deadly Air of Delhi

If you take a look at the list of the world’s most polluted cities, 13 out of the top 15 are in India. The nation’s capital sits at number 10. On the 8th of November at around 8pm, an extra sensitive air quality instrument gave a reading of 1,010 when measuring Delhi’s air. Anything between 300 and 500 is considered hazardous, the worst category on the index. This means that all readings above 500 are beyond the Air Quality Index. New Delhi has a health crisis on its hands, and it needs to deal with it right now.

The story of Delhi’s air pollution is not new. It has reached emergency levels before, and the quality always lingers in the hazardous zone. There was a brief moment during the lockdown last year when the air cleared up, but other than that the city experiences some of the poorest air anywhere in the world. A report by Scroll found an increasing number of lung cancer patients in the city below the age of 45. Generally, it takes about 20 plus years of a pack-a-day cigarette smoking to develop the cancer. Delhi’s air is speeding up that process even amongst non-smokers. At its absolute worst, breathing in Delhi’s air is equivalent to smoking 50 cigarettes in just a single day.

The government has thus far reacted with measures such as banning firecrackers, mandating working and studying from home, and an odd/even rule with respect to vehicles on the road (license plates ending with odd numbers allowed on one day and even numbers on the other). None of these ideas tackle the core issue, however. Most of Delhi’s air pollution comes from the neighbouring states of Haryana and Punjab, where an age-old technique of straw burning happens en masse in the months of October and November. 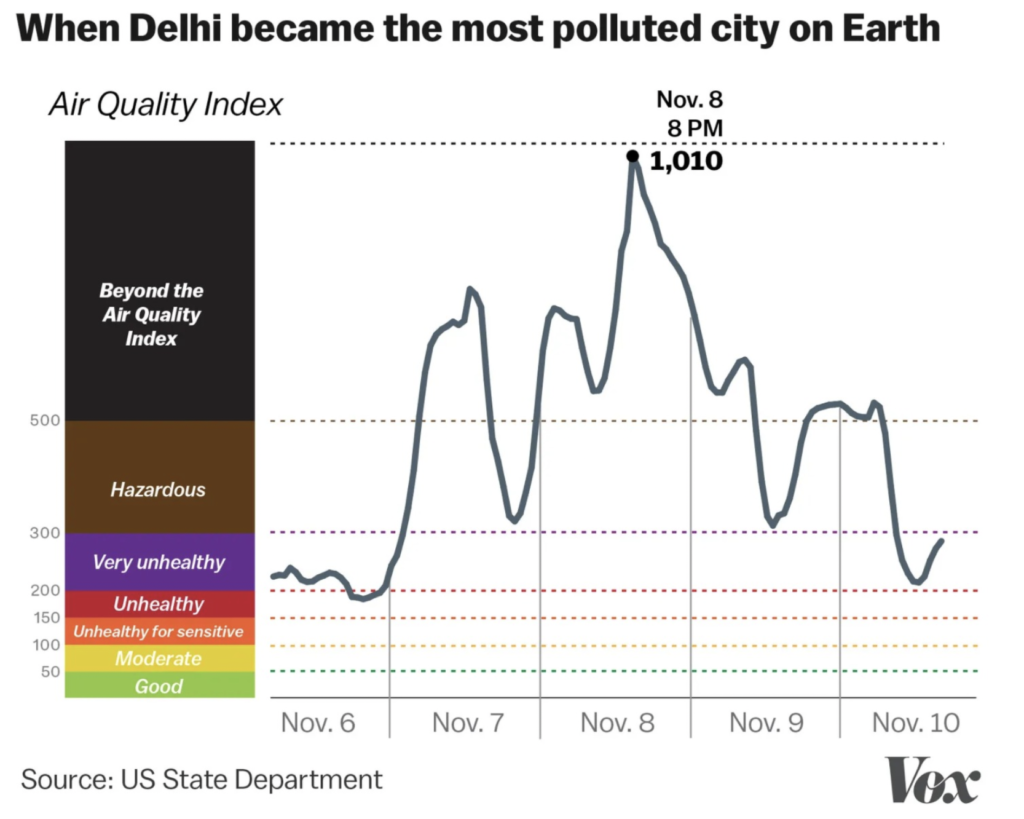 Farmers who grow rice (20% of India’s rice comes from Punjab), have to clear their fields to prepare for the growing of wheat, which needs to be done between the months of November and March. Punjab also accounts for 40% of the country’s wheat production. The rice crop consists of a significant amount of straw and farmers don’t really know what to do with it, so they burn it. 11 million tonnes of rice grown in Punjab leaves behind a staggering 21 million tonnes of straw. Since the schedule for wheat growing is so precise and it accounts for a large portion of the farmers income, burning the straw is the best option available to farmers.

There are alternatives such as tilling the straw deep into the soil prior to the planting of wheat or using the straw as biomass power or even converting it to paper. All of these solutions require expensive infrastructure which is a cost that the farmers are not willing to bear. The most cost effective option for the farmers is to simply burn the straw.

The pollution from the burnt straw gets carried towards Delhi by air currents where it then mixes with other forms of pollution. Vehicles, construction, industrial activity, all the usual suspects which by themselves are problematic, now combine with the smoke released by the neighbouring states to create a deadly smog, and dangerous amounts of it. The particles are known as ‘PM2.5’ which refers to concentrations of particles with diameters of 2.5 microns or less. The US Embassy in New Delhi found that the PM2.5 concentrations reached levels of 1,200 which is 48 times above the guidelines established by the WHO.

There have been protests and the citizens demand cleaner air, yet the government has thus far failed to control the situation. The answer would be to put an end to the straw burning technique used by the farmers, but the government is hesitant to take such action. Why? Because farmers in India form a strong voting bloc. They do not want to compromise on their prosperity for the sake of urban Delhites. In a country where farmers are already financially troubled, expecting them to spend money on more expensive technology is unrealistic.

Apart from financial reasons, there are also political and ethnic issues that make the issue difficult to resolve. Punjab and New Delhi have had a contentious relationship owing to the Khalistan separatist movement which led to the killing of former Prime Minister Indira Gandhi and the subsequent violence perpetrated against Sikhs in the capital. Farmers in Punjab therefore have a less than trusting relationship with Delhi and are reluctant to bow to the government’s demands.

One solution can be for the government to subsidise the purchase of new technology which would help farmers find alternative uses for the straw. The Energy and Bio-products Research Institute of Aston University in the UK has developed a piece of tech known as ‘EnergyHarvest’. This device can compress the straw and convert it into little pellets which can then be converted into ‘bio-char’, a form of charcoal. The straw can thus be used as a form of energy and is said to be easy to store and inexpensive to transport.

The straw can also be used to make paper, although the technology needed for that is more expensive. The main point is that solutions which can please everyone do exist. Considering the state of the air in Delhi right now and the impact it is having on human life, both fatal and otherwise, it is imperative that the government acts now. The fact that Delhi is the capital city adds to the urgency of the issue. With the central government situated there, there is on the one hand an actual threat to the health of the nation’s top politicians, while on the other the inaction represents a rather unfortunate side of the country’s politics.

The Role Of Minerals In The Transition To Clean Energy