Amongst all the ‘doom and gloom’ news with respect to the state of the Indian economy, there finally appears to be some positive developments. Bloomberg Quint has reported that the month of September has seen a significant improvement in business activities. The publication has tracked eight high-frequency indicators which speak to the health of the business sector. Among these, five had improved while three remained steady.

The improvement has been attributed primarily to the demand that has been pent-up over the course of the lockdown. While incomes and employment have been affected, the total lockdown resulted in a comprehensive stoppage in consumer spending throughout the economy. Naturally, a large part of the spending had to be delayed until a point in time when restrictions would be eased, which had begun to occur during the month of August.

Bloomberg tracks business activity on a dial measuring ‘animal spirits’, which it arrives at by calculating the three months weighted average of the above mentioned eight high-frequency indicators. Currently, the dial shows a reading of ‘5’, with the maximum reading being ‘8’. This is up by one unit from the reading in August, into the orange zone (economy is heating up).

‘Animal spirits’ is a term that was coined by legendary economist John Maynard Keynes. The term refers to human instinct and refers essentially to behaviour that can not be predicted by any mathematical model. Instead, actions are driven by ‘spontaneous optimism’ and have nothing to do with forethought or planning. It is one of the few areas of economics which remain unquantifiable and yet is still highly consequential when it comes to predicting consumer behaviour. 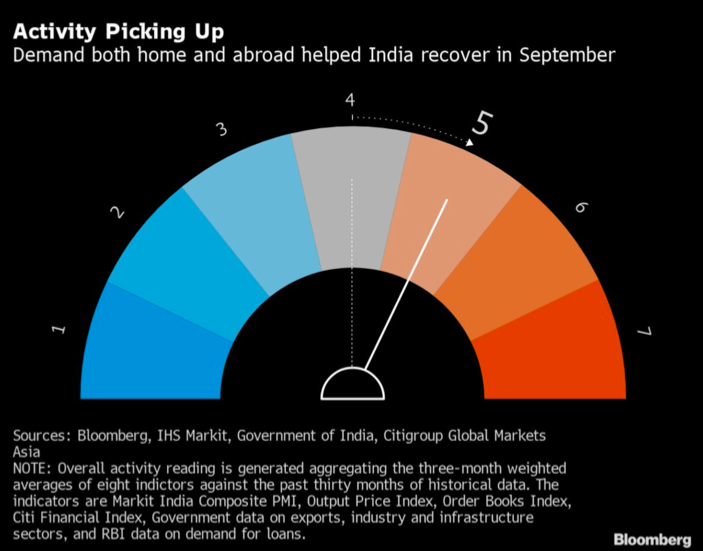 Activity in the services sector is still below 50 on the index, which implies that it is still in contraction territory. However, the index rose from 41.8 in August to 49.8 in September, showing a noticeable improvement. The index read an all time low of 5.4 back in April.

The manufacturing sector did more than just improve on its 2020 performance. The index showed a reading of 54.6 which places it firmly in expansion territory, but whats more is that the purchasing managers index rose to 56.8, the highest it has been since January of 2012. This is owed to an acute increase in new work orders. 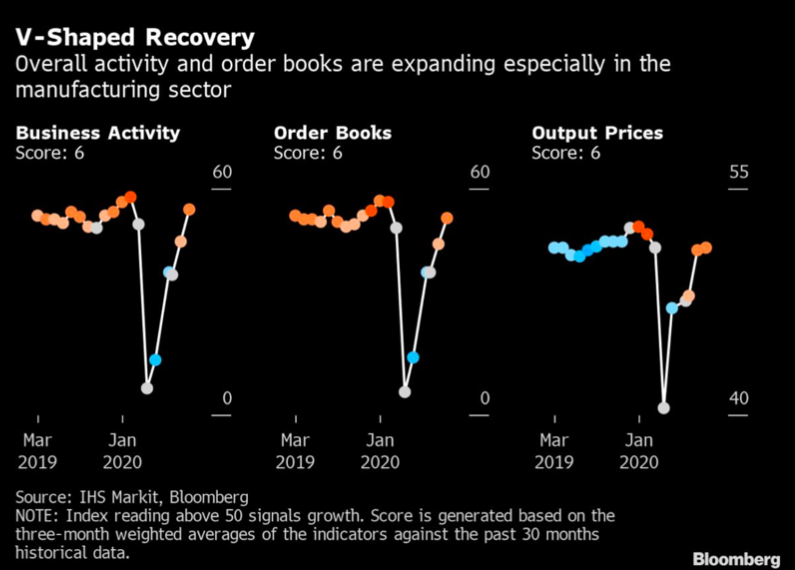 The above graphed illustrates what is known as a ‘V-shaped’ recovery, which speaks to a quick economic recovery (sharp decline followed by a sharp incline).

The trade deficit shrank in September thanks to both a rise in exports and a decline in imports. Exports improved due to increases in shipments of farm goods, drugs and pharmaceutical, and engineering goods. The automotive sector was another that did will in September with passenger vehicle sales showing a 26.5% rise from the figures one year ago. This is one of the key indicators of consumer demands and speaks well of consumers positivity. However, retail sales are still lagging behind heavily from the figures they showed last year.

Activity in real estate, however, has suffered even more as a result of the pandemic. The sector was already doing poorly over the last two years and the pandemic has only magnified this trend. Few units are being launched and fewer units are being sold as well. There are already a vast number of unsold units across the country. The RBI believes the problems (which already existed) have to do with funding and regulatory challenges. Bangalore was the only market where prices went up during the first quarter.

Much of the positivity is the result of an extended period of contraction in the economy. Like Newton’s third law of motion, every action must have an equal and opposite reaction. The economy must start getting better at some point, and there are signs that that is already happening. There are still many challenges that lie ahead, but the worst might be over. 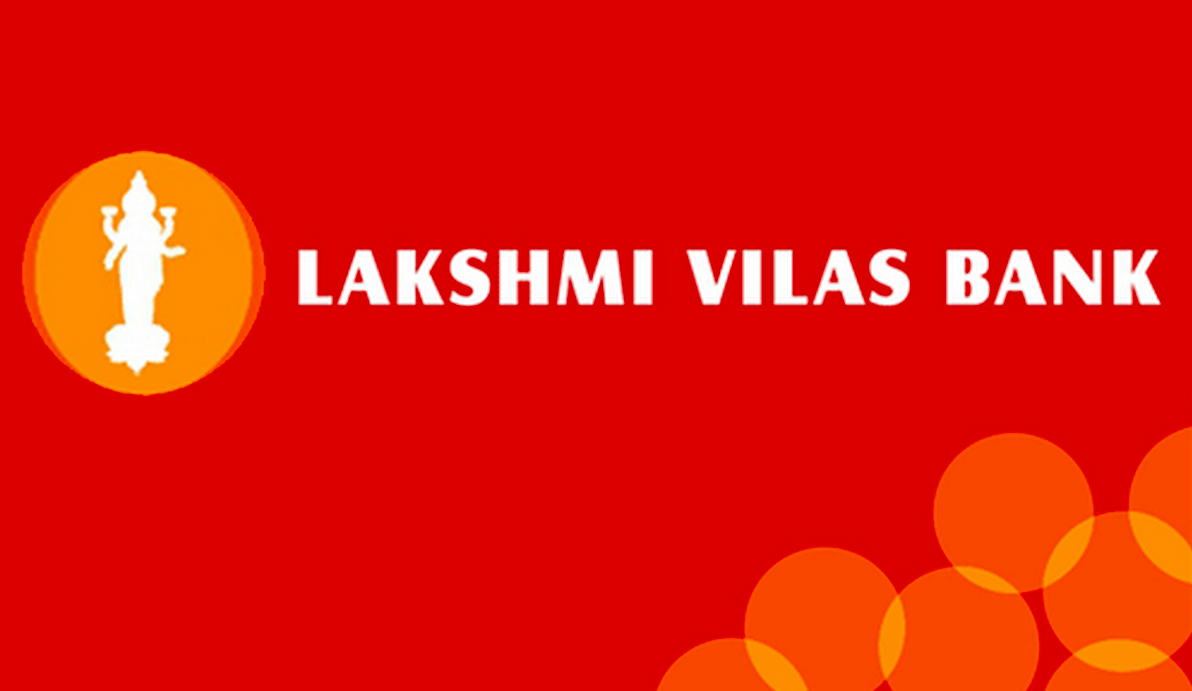