The past year has forced governments all around the world into spending enormous amounts of money to fight the pandemic. This spending has taken the shape of stimulus packages to keep the economy going, of investments into developing a vaccine, and of healthcare expenditure. There is no doubt that governments needed to spend. If anything, they should have spent more.

There is a school of thought, however, that cautions against excessive spending. It is at times a reason that leaders cite when asked why they haven’t loosened the purse strings a bit more.

A government earns money primarily through tax revenues which it then uses to spend on a number of things such as social programmes, salaries of government officials, infrastructure, etc. In most countries, expenditure tends to be higher than revenues. In a 2017 report published by the CIA, for example, only 41 countries out of more than 200 could lay claim to a balanced budget. This means that most countries borrow money to pay for their expenses, placing them in debt. We hear a lot about the ‘debt-to-GDP’ ratio and what the ideal figure ought to be. This term merely refers to the amount of debt a country owes against its gross domestic product, or the size of its economy. Until recently, economists were primarily of the opinion that as long debt remained below a countries GDP, then there would be no problem with additional borrowing. The suggestion was that debt should not exceed 90% of a country’s GDP.

The pandemic has forced a rethink on this idea. As already mentioned, countries were forced to ramp up spending in order to help their people. The US had to borrow so much to finance its spending that its debt-to-GDP ratio exceeded 100%, which means that it owes more money than the combined value of all of its domestic economic activity. This sounds bad, but it also sounds worse than it actually is.

What is National Debt?

To understand why this is, we first need to understand what exactly the national debt implies. When a country needs money, it borrows from other countries, financial institutions, private investors, or just about anyone interested in lending money. Governments issue bonds in exchange for money, and these bonds pay a certain interest rate to the investor. Since the bonds are backed by a government, they are considered to be one of the safest investments out there. The maturity period for a government bond tends to be on the longer side, with some not maturing until 30 years or more. Investors also have the option of reselling these bonds in the secondary market giving them the advantage of liquidity.

One common misconception about the national debt seems to be that if a country is indebted to another country or institution, then it is in some danger of falling under the control of that entity if it fails to repay the debt. Unlike commercial loans, there is no real collateral attached to borrowing on a sovereign scale. If a country defaults on its payments, it will become harder for it to borrow in the future, and will likely have to do so at a higher interest rate.

Depending on the nature of the default, the consequences can wary. In some cases a country’s overseas assets may be seized upon failure of repayment. In most cases of default, however, a country only fails to repay a part of the debt and enters into negotiations with the creditors on how to repay the rest. There is a certain amount of debt restructuring that occurs making the default become what is known as an ‘orderly default’.

Defaults do occur, but they are usually in the form of a delayed payment or a partial reimbursement which is then compensated in other ways. Yet even these cases are quite rare. Given this reality, lending and borrowing occurs frequently and on large scales and as such global debt as of 2020 stood at $258 trillion. This includes all money that is owed by everyone from citizens to corporations to governments. On the other hand, government debt as of 2019 stood at around $69 trillion but due to the increased spending forced by the pandemic, global government debt is expected to touch $92 trillion by the end of 2021. 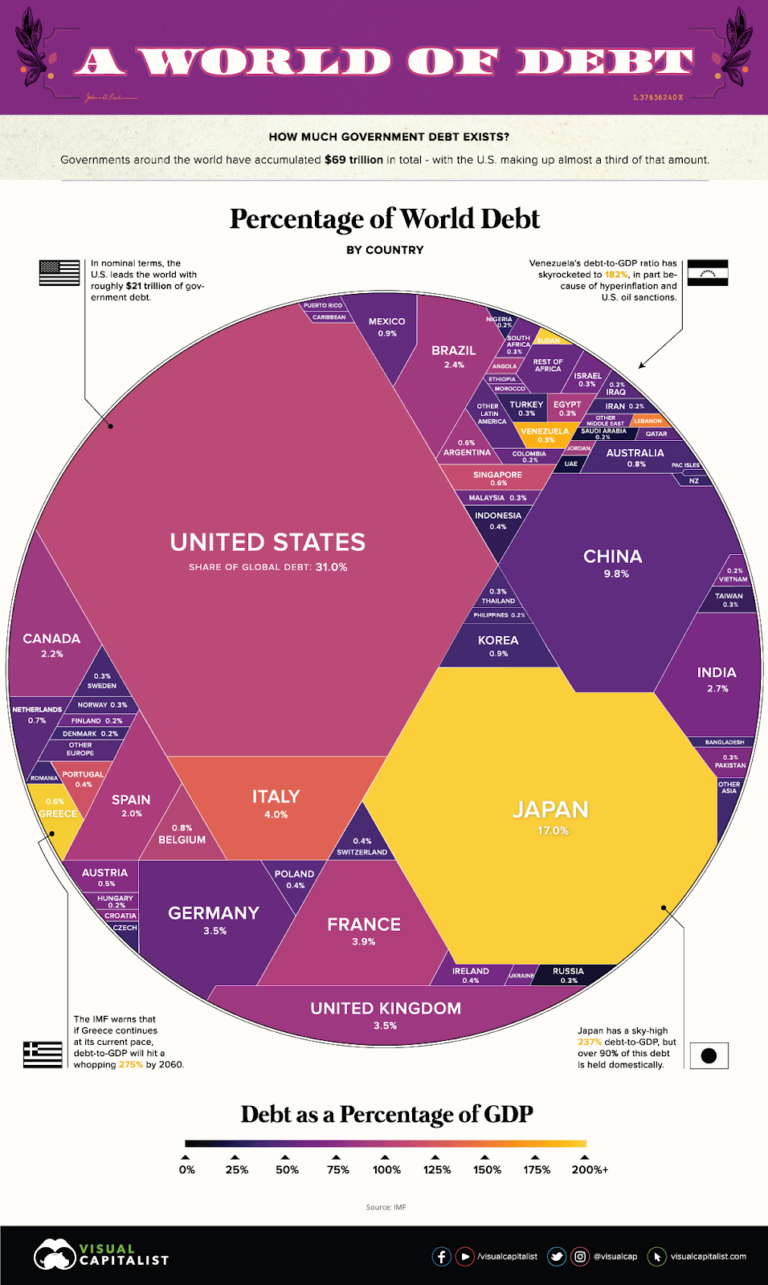 Can the debt get too high?

We mentioned earlier how the debt-to-GDP ratio should not exceed 90% as stated by economists. In reality a number of countries have exceeded this threshold with some even doubling their debt in relation to their GDP

If this is the case, are these countries in serious trouble? The answer to that is a bit complicated, and varies from case to case. It might be surprising to see Japan at the top of this list, considering that it is one of the largest and most successful economies in the world.  It all started in the 1990s when, after a decade of booming economic growth, its financial and real estate bubbles burst with catastrophic consequences. The government had to borrow heavily to finance the crisis and had to continue to do so to this day because of a number of other emergencies like tsunamis, earthquakes, a global recession, the pandemic, and so on. 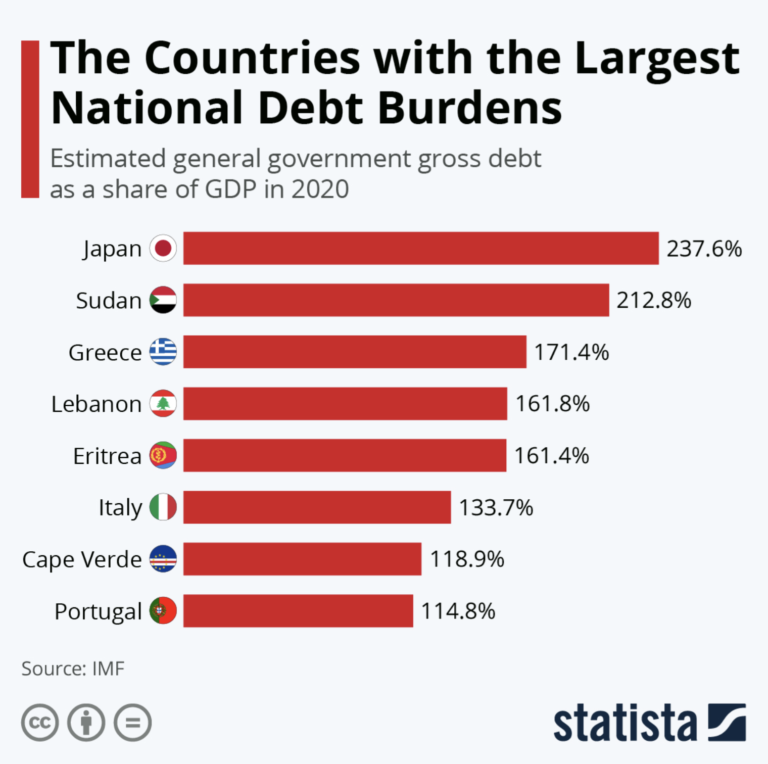 The graph below is a representation of the interest rate on a government bond in India with a yield of 10 years since the mid 90s. It has gone down from about 14% to just over 6% in a little more than 20 years. You will find similar graphs around the world. What this means is that the interest that governments have to pay on their borrowings has also declined. The consensus now appears to be that as long a country’s GDP growth outpaces the interest rate, then it should no issue borrowing as it will be able to make the interest payments. With countries like the US and Japan, who are amongst the biggest borrowers in the world, their growth just about edges the interest rates on their government bonds and as such more borrowing isn’t really an issue.

There is, however, the issue of how these countries spend this money. If the money is being properly invested into the country, whether it is in the form of social welfare programmes or infrastructure development, then the returns on those investments will on their own justify the borrowings. In recent years, however, the US has passed massive tax cuts for its wealthiest people meaning that its revenues are going down. With lower revenues, the government is less likely to be able to make the payments on its debt. Borrowing is only fine so long as the money is being used wisely.

What about India? Well interest rates here currently average around 6-7% and GDP growth over the last half a decade has been just below that. Our debt-to-GDP ratio however is still around 89%, meaning that we still produce more in a year than the money we owe. There has been criticism of the government for not doing more in terms of direct cash transfers as a part of the stimulus measures that it undertook over the last year or so. There is certainly an argument to be made that we ought to act in a financially responsible manner, and we do, but at the same time the government should not be afraid to spend when needs be.

As mentioned earlier, as long as the spending is done in a responsible manner, the returns of that spending will outweigh the costs. It will also have a positive effect on our GDP growth which has been below par off late. Low interest rates have been a long-term, worldwide trend. There is of course the possibility that they can go up again, but even then, they will probably only do so at a gradual rate.