India’s relationship with China has been particularly tense in recent years. The Chinese attempted to build a road in the disputed Aksai Chin region in Eastern Kashmir in 2020. This led to a number of skirmishes between the two armed forces and resulted in the deaths of at least 20 Indian soldiers and an unconfirmed number of Chinese soldiers as well. The Indian government reacted with a ban on a number of Chinese apps including the likes of Tik Tok and WeChat, which of course the Chinese were unhappy about.

The relationship between India and China has always been edgy. Soon after independence the two countries engaged in border disputes that continue to this day. Recent history, however, shows a period of economic cooperation that saw China become India’s largest trading partner. While this may reflect a positive development, the two nations are nevertheless wary of each other’s status as a regional power.

China’s economic growth over the last two decades has been tremendous. India’s itself has not been too bad, but in comparison to its Asian counterpart, it falls far short. This fact has placed China firmly as the undisputed regional power, with India coming in a distant second. Given that this is the case, the dynamic between the two countries has been altered. China’s economic superiority allows it to engage in certain practices that are detrimental to industrial activity in India. The most prominent of these practices has been its habit of flooding the Indian market with cheap goods. China’s manufacturing capabilities means that it can produce a variety of products at a lower cost enabling it to export these goods to countries like India whose capabilities fall short in terms of efficient production. This hampers the growth of the Indian manufacturing industry as there is less demand for Indian-made goods.

The Indian government has reacted by introducing anti-dumping measures on hundreds of Chinese products. Prime Minister Modi has also emphasised the need manufacturing in India through his ‘Make in India’ initiative which is a part of the larger ‘Aatmanirbhar’ or self-reliance ideology. 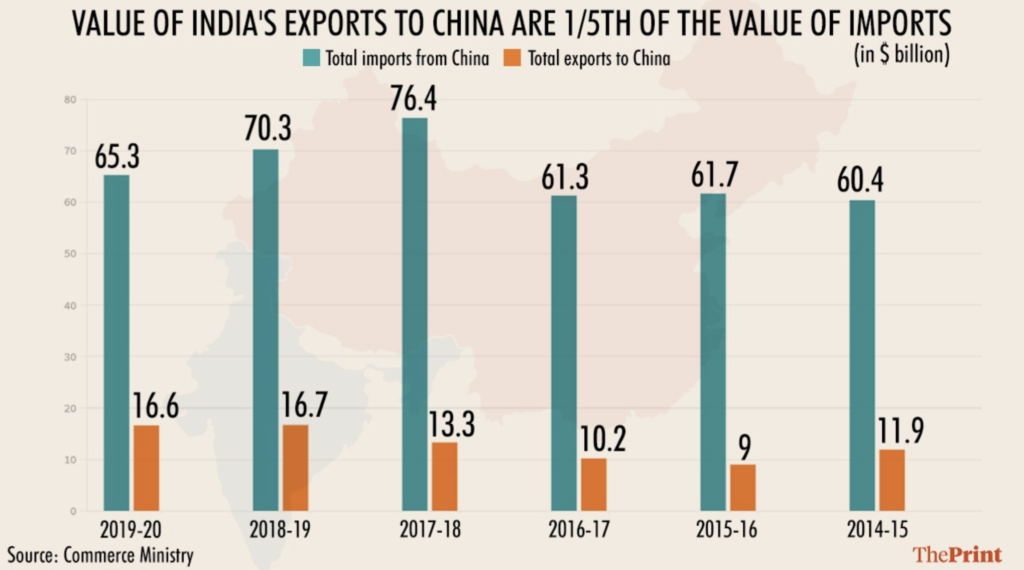 The focus on Indian manufacturing is without a doubt imperative.

In recent years the trade between India and China has taken on a worrying pattern. The trade deficit has always been an issue as it has been heavily in favour of China, but nature of the trade itself resembles the sort of ‘trade’ that occurred between India and the British Empire pre-independence. The data very clearly shows that India’s exports to China have almost exclusively been raw materials like granite stones, petroleum products, iron ore, organic chemicals, refined copper, and raw cotton. On the other hand, imports from China include finished goods like data processing machines, telephone instruments, electronic circuits, semiconductors, antibiotics, and automobile components.

The British Empire’s trade policy with India was one of extraction. Local manufacturing was suppressed in favour of manufacturing in England. It got to a point where raw materials in India were produced solely for the benefit of English proprietors. Just as China is now India’s largest trading partner, Britain occupied the same position back then as well. This of course severely handicapped India’s manufacturing capabilities to such an extent that we essentially had to start again from scratch. This after being a flourishing manufacturing economy before the British arrived, having supplied the markets of Asia and Europe with high quality products.

The current pattern of trade creates a similar threat to the manufacturing capabilities of India today. An over reliance on Chinese-made goods will stunt the growth of Indian manufacturing but it also reflects the state of manufacturing in India today. We simply cannot compete with the Chinese at this moment in time. The Prime Minister’s agenda only addresses the problem in the short term. Protectionist measures generally lead to economic isolation and a slowdown in technological advancements due to a lack of competition. Eventually, everyone from the producer to the consumer suffers.

The long term solution must address the core issues. Investments that focus on creating a skilled workforce need to be made. Research and development is another area that requires expenditure if we are to maintain long-term competitiveness. Micro, small, and medium enterprises (MSMEs) account for about half of India’s manufacturing output and around 40% of its exports. This sector was amongst the worst affected by the pandemic and therefore needs adequate support that goes beyond the stimulus measures offered by the government thus far.

The sector needs to be nurtured even during normal times as it employs a significant portion of the workforce and contributes to nearly a third of the country’s GDP.

To be fair, the government has made valid attempts to aid the long-term success of manufacturing in India. It has committed itself to the development of infrastructure and is constructing roads, bridges, etc. in a timely manner. It is also trying to improve the ease of doing business in India through reforms like GST and encouragement of FinTech.

China’s agenda is clear for the world to see. The ‘Belt and Road Initiative’ that was launched under Xi Jinping in 2014 represents its view of itself. No one would argue against the fact that China is the world’s factory, and the Chinese know how to use this to their advantage. By embarking on what is likely to be the largest infrastructure development project in history, placing itself at the center, China is ensuring that all roads lead from Beijing. Not only this, but the Chinese are also engaging in a form of neocolonialism known as the ‘debt-trap policy’. Their banks lend heavily to poor countries so that they can finance their own infrastructure projects but do so by using these countries’ resources as collateral. In many cases, the Chinese are more than likely aware that these poor countries will default, giving China unfettered access to their mines, ports, etc.

It is of vital importance that India shores up its manufacturing capabilities not only for its own sake, but also for the sake of the region. By acting as an effective counter balance to China, India can help dilute some of the enormous power that China possesses, at least in economic terms.