By BCL IndiaNovember 5, 2020 No Comments

During the last week of September, the Central Government passed three farm bills that it claims will totally reform the agricultural sector in a way not seen since the Green Revolution in the 1960s. The bills follow the ordinances issued during the early weeks of the lockdown.

While the agricultural sector has been crying out for reform for some time now, some remain unconvinced that the new bills passed will necessarily bring about the kind of changes that farmers want to see. This has been made evident in the protests seen in many parts of the country, primarily in Punjab and Haryana.

So, what are the bills that were passed and what do they entail?

The Farmers’ Produce Trade and Commerce (Promotion and Facilitation) Bill.

The Farmers (Empowerment and Protection) Agreement on Price Assurance and Farm Services Bill.

The second of the three bills creates a framework for contractual farming. What this means is that farmers can enter into contracts with buyers beforehand in order to guarantee a price for their goods. The contracts can also be framed in such a way that farmers agree to sell their goods to one particular buyer for a set period of time (eg. 5 years). Farmers can conduct business with wholesalers, retailers, and exporters in a manner which would protect them against any sort of exploitation.

Up until the passage of this bill, the government had listed a certain number of items under the ‘Essential Commodities’ category. These commodities, deemed to be essential to life in India, could not be hoarded or have their prices artificially increased/decreased. Now, the government has removed items such as cereals, pulses, oil seeds, edible oils, onions and potatoes from the essential commodities list, and as such farmers and traders will be allowed to trade these items as they please. The government, however, reserves the right to place these goods back on the essential commodities list during extreme circumstances such as war or famine.

To fully understand how the new laws are going to change the landscape in the agricultural sector, some historical context is necessary . In the initial years after independence, farmers used to sell their produce directly to the consumers, however, they received little to no support from the government in terms of loans or minimum selling prices (MSP). This forced them to borrow money from local ‘Zamidars’ who used to lend to the farmers at very high-interest rates and generally exploitative terms. Naturally, farmers struggled to pay them back, and when they couldn’t, the Zamidars would seize the farmers’ produce at a very low value determined by themselves. This wouldn’t help clear their dues and as such the farmers remained indebted to the Zamidars.

The situation had to change as, at that point in our history, more than 75% of the country was engaged in agriculture. This ushered in the ‘Green Revolution’ in the 1960s, and along with it came the legislation that sought to protect farmers. The government passed the APMC Act which created a regulated space wherein farmers were guaranteed that their produce would be purchased by the government at a fair price.

As mentioned before, the APMCs or mandis essentially facilitate the sale of goods between farmers and middlemen through auctioning. It is only if the farmers fail to sell their goods that the government steps in and purchases them.

The system set up in the 1960s worked for a while, but eventually, problems began to rise. The middlemen realised that they could collude with each other and practically form a cartel. As a result, farmers were not getting a fair price for their goods while the middlemen were able to sell to vendors earning substantial profits.

This has been going on for a long time and as such the sector has been in need of reform. Do the new laws help? They do, but partly so. The issue with the new laws passed is that they create an entirely new system for the farmers to engage in trading activities, when in reality all that was needed was to address the loopholes in the old system.

What the farmer is contesting for.

At least 80% of farm holdings in India are less than 2 hectares. That is to say that most farms and most farming operations are very small. These farmers will without a doubt be the underdog in negotiations with big businesses. There is much room for exploitation, especially since the new free market will largely be unregulated. On the other side of the issue is this. The top 10% of farming households operate 50% of cultivable lands in the country, while the bottom 50% are cultivating only 0.5%. There is immense inequality in this sense. The entrepreneurial spirit that the government is hoping for will only be present within that top 10% because they are the only ones who will have any sort of negotiating power. That leaves the vast majority of the farmers in a position of severe disadvantage

The government has made it clear that it will not do away with the mandi system. However, the mandis rely on the taxes collected on the business conducted within their premises. If business is being taken away from the mandis, then they lose out on their funding and as a consequence, will eventually cease to exist . This will lead to a situation in many parts of the country where farmers will be left with no choice but to sell to private businesses, further increasing the scope for exploitation.

Another issue is that state governments earn a lot in terms of revenue through the operation of the mandis. The Punjab government currently earns between Rs. 3,500 and 3,600 Cr. annually. State governments will certainly be impacted.

With respect to contractual agreements, there is no regulation set in place that would guarantee farmers a minimum price. In a situation where farmers do not hold any negotiating power, they can be easily exploited. MSPs will however continue to operate within the mandi.

The removal of several food items from the essential commodities list is bad news for both consumers and farmers. Private interests can artificially manipulate the prices of certain goods, capturing an unfair amount of the consumer’s surplus.

What we can also improve.

To truly improve the agricultural situation in India, the government should also focus on the quality of yield. According to data from the United Nation’s Food and Agriculture Organisation (FAO), India spends only 0.3% of its value added (spending as a % of agriculture GDP) in agriculture. In comparison, China spends 0.62%. As a result, the country’s yield per hectare falls far behind China & also USA. 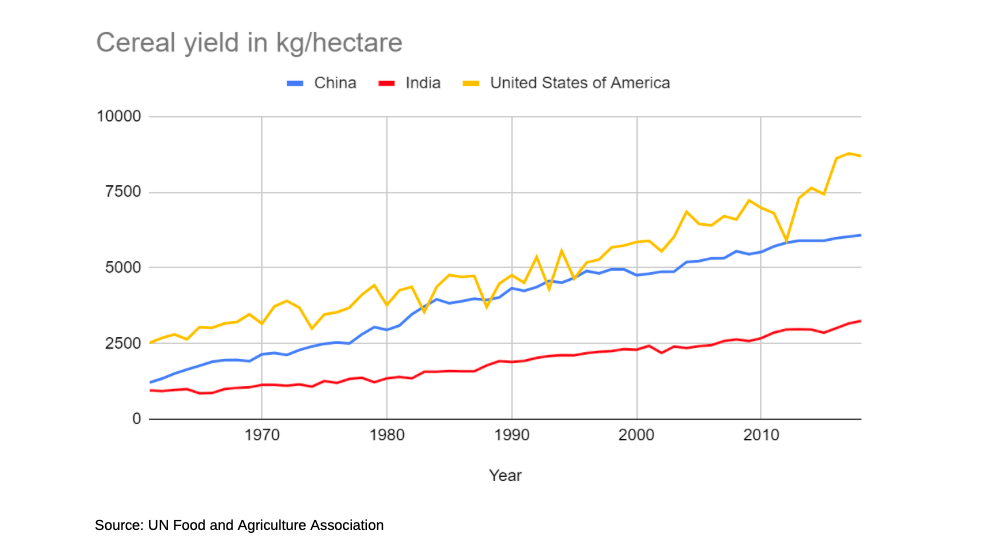 Another area the government ought to focus on is re-skilling the agricultural labour force towards other industries. Agriculture still employs around 50% of the Indian workforce. With such a large percentage of the workforce engaged in one sector, the value added per worker will unsurprisingly be small. For farmers to do well, demand for their produce needs to go up. This will happen with a greater population engaged in other activities, perhaps in bigger cities. How one deals with the challenges of migration (or reverse migration as we have recently seen) is another question.

The government also knows that it is not uncommon for farmers to receive support. This is the case in most countries. The nature of the work and the profile of the workers creates this need for social support. The bills passed are a part of the government’s ‘Atmanirbhar Bharat Abhiyan’ agenda, whose core message is a self-reliant India, but it will be sometime before the farmers of our country are in a position of self-reliance.

In some years hence, we will see the results of the newly enacted policies. But the notion that a free, unregulated & unchecked market is best for the farmer certainly seems a bit far-fetched.