Monday saw the biggest single day fall in the price of the Adani Enterprises shares in almost 10 years. Gautam Adani, the chairman of the group, observed his personal wealth diminish by an extraordinary $6 billion. Even with such a loss, Adani remains Asia’s second richest man, a position he acquired just a few weeks ago.

The reason for the drastic crash has to do with the National Securities Depository’s (NSD) freezing of 3 Foreign Portfolio Investment (FPI) funds which own a significant amount of Adani shares. It later transpired, however, that this was a false story and the NSD itself later announced that no such accounts were frozen.

Even if this is the case, the structure of these funds are worth taking a look at. The three funds that were frozen are all based in Mauritius. Along with three other funds also based there, these six funds have almost all of their money invested in the various Adani Group companies. The ones that were supposedly frozen by the NSD are the Cresta Fund Ltd., Albula Investment Fund Ltd. and APMS Investment Fund Ltd.

These six funds from the Maritius have invested more than 95% of their capital into the Adani Group. This varies from $2 billion to $4 billion. None of these funds have invested even $1 million into any other Indian company. A good fund manager would ideally diversify their portfolio as best they can, with a maximum holding in one group typically not exceeding 20 or 25%.

If you were to search for these funds on Google, you wouldn’t even be able to find a website. For a fund that manages billions of dollars, one would think that they would at least have some basic online presence. The CFO of the Adani Group when interviewed by NDTV stated that his company is not answerable for the dubious nature of these funds and that the media ought to question the investors themselves.

BCL India will introduce the best Wealth Managers to you!

There are reports which claim that these accounts were actually frozen on the 31st of May. So why then did the market only react a full 2 weeks later? Part of the explanation might have to do with a tweet posted by the renowned business journalist Sucheta Dalal hinting at the likelihood of fraudulent activities in relation to a certain ‘group’. She did not mention who or what, but that tweet seems to have acted as a trigger point upon which the Adani Group shares fell into free fall.

Another scandal hard to prove outside the black box of information available with SEBI tracking systems is the return of an operator of the past who is relentlessly rigging prices of one group. All through foreign entities! His speciality & that of a former FM. Nothing changes!

Additionally, if the accounts were indeed frozen on the 31st of May, why hasn’t the NSD disclosed this information? The only communication seems to have been with the Adani Group itself wherein it had disclosed that the accounts as of the 14th of June were not frozen.

The Group also released a clarification stating that “demergers have resulted in the ownership mirroring in the portfolio companies.”

The loss in value was initially in excess of $10 billion, but by the next day the Adani Group was able to recuperate a significant amount. Monday’s sell off was perhaps the first problematic day in a year wherein Gautam Adani has seen his wealth grow exponentially. Since the start of the pandemic, the Adani Groups various companies have experienced massive surges in their share prices. Adani Transmission, for example, is up 582% while Adani gas is up 975% over the last one year. The flagship firm Adani Enterprises also saw its share prices go up by 952%. 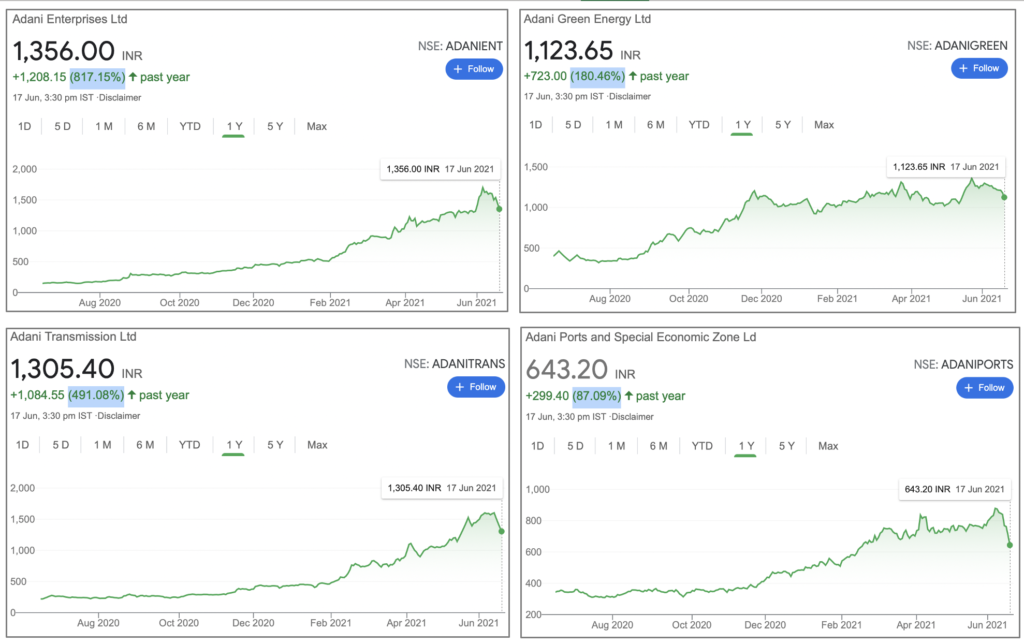 Gautam Adani shares a special relationship with the current Prime Minister Narendra Modi. Adani had helped him campaign both for CM of Gujarat and for PM in 2014 by lending him his private jet. He also broke away from the Confederation of Indian Industry (CII) who were at the time wary of associating positively with Modi due to his role in the 2002 Gujarat Riots. He formed his own industry body which rallied behind Modi in an effort to promote him as a business friendly leader. In 2018, the Indian Government relaxed certain rules with regards to who can run newly privatised airports, wherein individuals with no experience in the sector could also put forward bids. Adani ended up bidding for and winning control of all six airports.

Towards the end of Modi’s first term in 2019, his government declared the region where one of Adani’s power plants were set up in Jharkhand to be a ‘Special Economic Zone’ (SEZ) which means that it would enjoy significant tax benefits. This same power plant has come under fire from numerous environmental acitivists  s the land was acquired from the government when it in fact belongs to tribal groups from that region according to ownership rules which protects these people.

Gautam Adani has done well to develop cozy relationships with the country’s top leadership. His political savviness has undoubtedly helped him ascend to the position that he is in now, which is why when a journalist like Sucheta Dalal makes the kind of claim that she did, one can’t help but take notice.